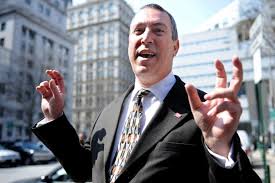 In an email to friends and supporters yesterday, former assemblyman Adam Clayton Powell IV declared his unambiguous intention to run for Congress in 2016. He begins his email, “Now that Congressman Charlie Rangel has begun his last term, it’s time to begin the journey to replace him.”

Powell seeks to fill the expected vacancy in the Upper Manhattan/Bronx’s 13th congressional district when Rep. Charles Rangel retires. Powell campaigned vigorously for his one-time rival in the primary battle against State Senator Adriano Espaillat in 2014.

Powell faces the daunting challenge of running federal office at the same time as other legacies Hillary Clinton and Jeb Bush seek the presidency. That Harlem district has only been represented by Adam Clayton Powell, Jr. and Charles Rangel (who defeated Powell in 1970) in the last 70 years.

Powell is the first candidate to officially declare for that seat. Others mentioned as possible successors to Rangel include [The Observer reports CM Viverito says she is not running for Congress], CM Inez Dickens, Assemblymembers Keith Wright and Robert Rodriguez, as well as Rev. Michael Waldron finished 3rd behind Rangel and Espaillat in 2014.

Rev. Kelmy Rodriquez, a local community leader, said that as this point in time, “Adam is my choice.” Rev. Rodriguez left open the possibility of changing his mind should Manhattan County Leader, Assemblyman Keith L.T. Wright announce that he was running.

In his email, Adam Powell IV mentions that fact and pledged to “preserve the rich history of these last 70 years” by being a progressive voice, too. And he asked supporters to join him “in this exciting journey.”

And interesting political journey it be for a district in transition.

Powell IV’s email is excerpted below:

“Now that Congressman Charlie Rangel has begun his last term, it’s time to begin the journey to replace him. The 13th Congressional District covers most of Northern Manhattan and parts of the Northwest Bronx. It has been represented by two legendary figures: my father, Adam Clayton Powell, Jr. (who created the seat and became the first African American Congressman from NY 1944-1970) and Charles B. Rangel (1970-Present). We need a progressive voice to preserve the rich history of these last 70 years. I intend to run for that seat.

This is not an exploratory committee; I’ve been exploring this district for over 20 years. It’s time to run. I know this congressional district as well as anyone. From El Barrio to Harlem to Washington Heights & Inwood to the Bronx, I’ve represented various parts of this district in the City Council and in the State Assembly. Most of the leaders in these various neighborhoods are people I know and have worked with throughout the years…”