Looks like there’s a new player in 77th Assembly District version of cable TV’s Game of Thrones. And her name is Sherrise Palomino.

Palomino is a 2nd generation American of Jamaican, Cuban and Indian heritage. She earned bachelor’s and master’s degrees at St. Johns University. She is a “We Are The Bronx” fellow. Sherrise has worked with AIDS/HIV, at-risk and transgender youth in Queens and the Bronx.

She survived specific objections to her petition signatures and the city Board of Elections placed her on the Primary ballot.

Palomino won the endorsement of the Manhattan-based LGBT Jim Owles Liberal Democratic Club. And is rumored to be working with Emily’s List, a national organization dedicated to electing more women  and pro-choice Democrats to public office.

Over the weekend, Ms. Palomino’s team went post(er)al all over the 77th AD. Posters are nice and they seem to motivate supporters but they don’t win elections. Voter “touches” (in-person, robocalls and multiple direct mail) are more important.

Her campaign committe, Palomino2014 has $707 cash-on-hand (as of 7/15). Palomino’s 32 Day Pre Primary disclosure report has yet to be posted online by the state BOE. 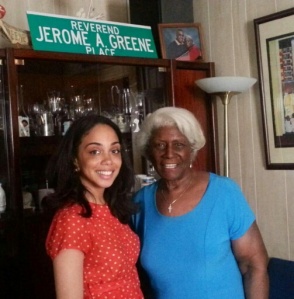 Palomino joins attorney LaToya Joyner and Pastor Verdell Mack in the race to replace CM Vanessa Gibson in the Assembly. Joyner is backed by Gibson, deputy BP Aurelia Greene (who represented the 77AD, 1982-2009) and the Bronx County Democratic organization.

No matter what happens on September 9, a woman will represent the district in Albany once again.

1 Response to Sherrise Palomino Stakes Her Claim In 77AD Race