Posted on August 8, 2014 by SquarePegDem

As I sat through the three-day court hearing on the challenge to Michael Blake’s residency status, I made some observations.

Michael Blake is a caliber of candidate who doesn’t usually pop up in Bronx politics. He comes with a pedigree seldom seen.

His celebrity status and national/Washington DC connections have enabled him to amass well over $160,000 in his war chest. His campaign is being handled by BerlinRosen and advised by Hank Sheinkopf.

Despite his stunning credentials and pedigree, Blake has feet of clay. His connection to the predominantly black and Hispanic 79th assembly district is tenuous.

Opposing candidates deride him as having parachuted into the district hoping to take advantage of the political vacuum created by the corruption conviction of the area’s most recent assembly member Eric Stevenson.

Blake quest may or may not be derailed by his ability to meet the minimum residency requirements of living in the 79th district at least 12 months prior to the general election and five years residence in the Empire State.

Opponents, namely the functionaries of the Bronx Democratic political machine, contend that Blake primarily lived and voted in the District of Columbia (DC) until sometime in 2013. As proof they point to his voter registration and voting history in DC as dispositive evidence that the nation’s capital was Blake’s primary place of residence until last year. 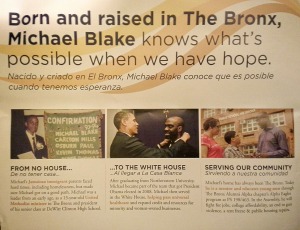 Blake, of course, claims otherwise. He asserts that, like a member of the armed forces, he was serving his nation as a member of the Obama White House. And that his residence in DC was temporary.

Since graduating from Northwestern University in 2004, Blake only returned to the Bronx to visit his family. In June 2013, he registered to vote in the Bronx for the very first time. In fact, the 31-year-old Bronx native had never voted in New York until last September.

I won’t rehash the details of this week’s court hearings. For that you can go here or here.

At a court hearing on Monday, August 11, Blake’s attorney Sarah Steiner will have the opportunity to present written arguments showing that he meets both State residency requirements.

Meanwhile, something not kosher is afoot in the 79th assembly district, again. Blake tells supporters that efforts questioning his residency is “political trickery.”

But whose trickery, I asked myself? After all, it’s only a state assembly seat.

Albany insider often quip that new legislators arrive with an exit plan on Day One.

One can only wonder what Blake’s next step is.

Perhaps, Mr. Blake has his eyes on Congress?