Posted on August 6, 2014 by SquarePegDem 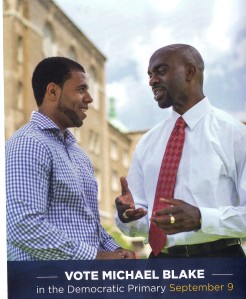 Blogger Gary Tilzer (@UnitedBlogsNY) writing on his blog True News has pointed out that Citizen Action, VOCAL-NY, CVH Power and NYCC are all clients of BerlinRosen (BR). BerlinRosen is best known for guiding Bill de Blasio to his Democratic mayoral primary upset win over his better known opponents. They have since become the go-to agency for progressives and their causes.

BerlinRosen serves as Michael Blake’s lead campaign consultant. BR is definitely earning its hefty monthly retainer. The public relations consultancy recently scored a glowing candidate profile in the Observer, in addition to rolling out endorsements of Blake by their advocacy clients.

An excerpt of the email announcing the Citizen Action of New York endorsement reads:

It is with great pleasure to announce that we have received the endorsement of another amazing organization committed to progress – Citizen Action of New York.

They join both the VOCAL-NY Action Fund, CVH Power, and New York Communities for Change in endorsing me, showing that the progressive coalition in New York City is rallying behind our campaign. I’m humbled by their words:

“Citizen Action of New York is proud to join our allies and partners in the Progressive Power Coalition in support of Michael Blake for New York State Assembly. Michael has demonstrated his commitment to progressive values and will bring leadership to a district that very much needs it. We look forward to working with Michael both in NYC and in Albany as we fight to fund our schools, raise wages, and pass Fair Elections for New York State.”

As the next Assemblymember of the 79th District, I look forward to standing with Citizen Action of New York in our fight for a stronger and more equal society.

The Democratic Primary September 9 (that is if Blake survives the battle over his residency problem).