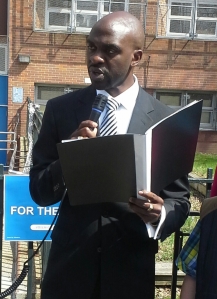 Blake’s detractors call him a “carpetbagger” with no real connections to the district. They point to his sketchy residence and voting history.

Blake retorts that he was “born and raised and consistently engaged in the Bronx.” “No one can ever say that I don’t have ties here. If they are saying that then there is no real fact to that [assertion],” he added. Blake points out that he has been preaching in area churches since age 13, mentors students at PS 198X and volunteers at several senior citizens centers.

However, a search of his voting record indicates that there may be some validity to those charges against Blake.

Board of Elections records indicate that Blake first registered to vote in NY in June 2013 from Edison Arms, a federally subsidized apartment complex for seniors and disabled people, where his mother lives. This past January, he re-registered from a Washington Avenue address in the 79th AD.

Blake appears to have no City voting history prior to last year. He voted by absentee ballot in the 2013 primary and general elections.

A woman who answered the phone at the complex’s management company said that the eligible head of household must be 62 years or older to reside at Edison Arms.

“NY permits multiple residences and voting is only one indicia of residence. There are many,” said election law expert Jerry Goldfeder.

Ezra Glaser, an election lawyer who has represented Bronx candidates, added, “There can be very little contact with [an] apartment, but the law is literally whether you have an “intention to return” – literally like the “swallows to Capistrano.” [edited]

And it’s on that intention to return that Team Blake relies upon in their response to media inquiries. Requests to review documents such as leases, DMV records and tax returns were rebuffed.

Blake spokesman Andrew Moesel blamed a Board of Elections clerical mix-up for missing change-of-address paperwork filed in November 2012 re-registering his candidate in the 79th district. Moesel expressed confidence that his candidate meets all residency requirements.

Steven Richman, counsel to the City Board of Elections points out that a signed absentee ballot application listing a new home address serves as a “change of address.”

Richman is quick to mention that matters involving residency go beyond the “ministerial review” of the Board of Elections. The Board may only rules on election law matters involving voter registration and nominating petitions.

Election law experts agree that the facts of the Blake case will determine the judicial outcome. A candidate may have multiple residences and one domicile that he/she intends to return to. Evidence of that intention is very broad.

One Bronx party insider noting that Blake is a preacher quipped that “God is forgiving but the election law ain’t.”

In what may be an indication of the road ahead for Michael Blake, his speech last Saturday was interrupted when a deejay mishap generated an audible, “access denied.”

Blake laughed it off saying, “That was the old 79th.”

Perhaps, but election law is unforgiving. 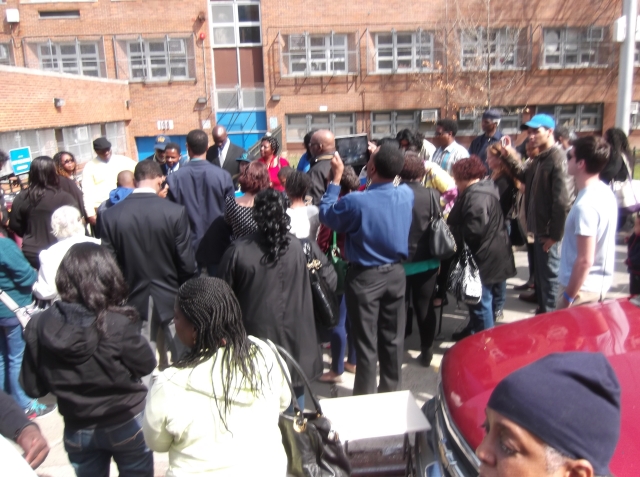