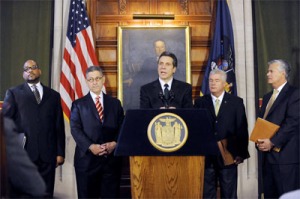 ALBANY — Calling them too political, Gov. Cuomo yesterday promised to veto the district maps proposed by the state Senate and Assembly.
“The maps are unacceptable,” Cuomo said yesterday. “I think anyone who looks at the maps will see the political machinations. You don’t have to look hard.”

The governor’s comment is his most definitive to date about the maps, which were drawn up by the Republican majority in the Senate and the Democrats controlling the Assembly and which would set district parameters for the next 10 years.