Posted on December 5, 2011 by SquarePegDem 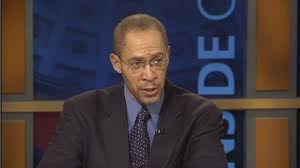 NY1 VIDEO: Former Assemblyman Michael Benjamin explained to Inside City Hall’s Errol Louis how he would ease what appears to be a chaotic year in 2012.

In a NY Post op-ed published on Nov. 30, Benjamin wrote

Election-year chaos looms, now that the Defense Department has declined to grant New York another waiver from the federal Military and Overseas Voter Empowerment Act.

The MOVE law requires the mailing of absentee ballots to overseas military personnel and other voters 45 days before the November general election. That means election officials must know who’s on the ballot by then — which means the primaries (and any recounts and legal challenges) must be over.

Without a waiver from the law, it’s hard to see the state beating the US Justice Department’s lawsuit to force an early primary.

Predictably, the Board of Elections has suggested holding a separate congressional primary — on top of the presidential primary and the “normal” one for local offices in September. With the general election and school-budget votes in May, that makes for five “Election Days” — a profoundly bad and costly idea. (New York City just blew $17.2 million on an off-year general election that drew 150,000 voters.)